I’m quite aware that what I’m going to share with you is my grieving mind trying too hard to pick up on worldly signs I happen upon to make myself feel better. And I’m not ashamed about it – I needed it. 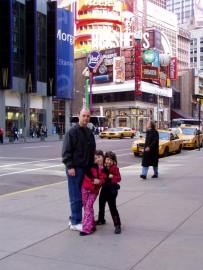 My mom, sister, and I traveled to the city that never sleeps for the Christmas holidays this year. We decided to hide amongst 8.5 million people who don’t know us or the pain we experienced three months prior. 8.5 million people who had no shadow of a doubt that we were three perfectly happy individuals wanting to experience Christmas in the city as typical tourists. There was an eerie comfort looking around at all the other families and thinking, “I wonder who else is doing this too.”

We got our room key and took the elevator up to the 20th floor. We did this at least eight times a day and each time I was struck with different emotions. When we would get out of the elevato

We stayed in room 2003. Coincidentally, that was the year I had first come to NYC with our family of four at the ripe age of seven. Walking down the hallway each time unleashed a flood of memories playing in reverse. 2016, 2015, 2014, 2013… three more years left with my Dad…and I had no idea. 2012, 2011, 2010,… and so on. We would reach 2003, where I couldn’t get the key card out fast enough. I would shut the door behind us inside of the room and look out of the window to the big city and the comfort of tall buildings filled with people way more important than me. I would do this everyday.

Walking out of the room was different. I would still get the same rush of memories through the years with all of them involving my Dad and Zafer. But once we reached 2016, we would turn to the elevator instead of going to 2017 and beyond. It sent a rush through my being knowing how close I was to a new chapter. A year my Dad will never see. A year Zafer wasn’t even close to being a part of. I’m not going to say I was eager to be in a year my loved ones would never encounter, but it’s more of an excitement to get out of the year that brought me all-consuming agony. So, in that moment, I am 20 years old on the 20th floor of a big city hotel where nobody knows me and nobody cares to. In about 5 days, I’ll be able to turn right. I’ll be able to live in 2017. In 2017, I’ll be able to live for those who didn’t see the calendar turn to January.

A sweet lady in the early morning of one Central Park walk mom and I shared, extended a kind word and offered casual conversation to us. Being kind was clearly who she was. She was simply being nice to be nice, and not because she was looking at us with pity eyes saying “I’m sorry for your loss.” She had no idea. She was just a kind woman who lived in NYC with her cute dog she took on leash-less walks in the frosty early mornings. She had no clue we had just lost a husband and a father.

That morning was the day we were leaving to come home to our quiet house filled to the brim with pictures which are still painful to walk past. People keep telling me that in time the memories will soften and won’t be as hard to face, but I’m still in the new-life stage, the unaccepting phase, the “there’s no way I’m never going to see him again” phase. But since being home, my mind turns to that Central Park encounter. I hadn’t really been obsessed with resolutions this year like I had in the past. She was my first concrete one. I wanted to make an effort to be more effortlessly kind like she. For no reason other than the thought that people just like me walk around everyday with the most painful burdens that are invisible to those outside of their social circles. So we may as well be kind. 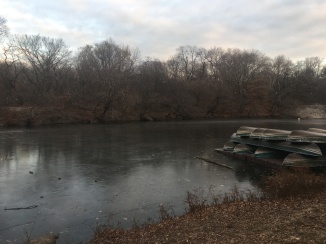 2017 is going to be passionate and a year of awareness. I have a type of consciousness now that I will use to cultivate my soul and the relationships I value moving forward. I will be more understanding to strangers and brutally honest to those who deserve it simply because life is too unfair to pretend that you like what’s going on. Life is only going to get harder. Life is only going to take more people away. 2017 is an acceptance of the pain – a trial for my new life post-dad.

I challenge those of you who know someone going through the loss of a loved one to approach it. Coming from me, my favorite conversations from 2016 were either with those who “get it” or those who aren’t afraid to try to “get it.” I find comfort in people who force me to talk about my father or Zafer because they understand that that is how I can keep their memories alive. Be a person who isn’t scared to talk to someone who is grieving because I promise you, most of us who grieve aren’t scared by much at all anymore- especially not death because we have people waiting for us. Be a person who doesn’t tip-toe around the topic because it’s coming for each and every one of us eventually. Maybe in 2017, who knows?

Happy New Year my angels, thank you for the motivation